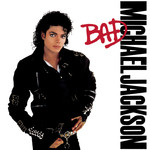 BAD is Michael Jackson's third studio album released through Epic Records. It was released on August 31, 1987, nearly five years after THRILLER. BAD has sold 45 million copies worldwide, was certified 9 times platinum in the United States alone, and has been cited as one of the 30 best-selling albums of all time. The album produced a record five Billboard Hot 100 number one singles, the first of the two albums to do so, the second being Katy Perry's 2010 album Teenage Dream.