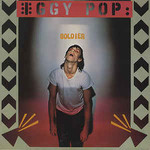 In 1980, every punk rocker in Christendom cited Iggy Pop as a key influence, and Soldier was the album where he started asking for some payback. Original Sex Pistols bassist Glen Matlock, Rich Kids' guitarist Steve New, Ivan Kral of the Patti Smith Group, and former XTC keyboardist Barry Andrews all signed on to back Iggy on Soldier, but the result was hardly the full-frontal rock assault one might have hoped for.

Reportedly, conflicts between producers James Williamson and David Bowie led to both of them walking out on the project, and Iggy is said to have gotten along so poorly with Steve New that he stripped most of New's lead guitar from the mix (which would explain why keyboards and acoustic guitar dominate the album). While 1979's New Values showed Iggy growing as a lyricist with a number of tough but introspective songs, Soldier sounds goofy by comparison, featuring oddball throwaways like "Dog Food," "Get up and Get Out" (whose lyrics are mostly cribbed from old R&B tunes), and the political "satire" "I'm a Conservative." But Iggy's in great voice throughout, and on the few songs where the band fully catches fire (like "Knocking 'Em Down (In the City)" and "Loco Mosquito"), he leaves little doubt that his powers as a performer were still with him. All Music Guide.