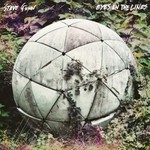 'Eyes On The Lines' is Steve Gunn's Matador debut, and his third release as a solo artist. Gunn has over 15 years of experience in the music business, most notably as a member of Kurt Vile's band The Violators.

Steve Gunn's music has always embraced expanse and movement. 'Eyes on the Lines' is his most explicit ode to the blissful uncertainty of adventure, and plays on the simple and profound relationship between humans and their environment. From the sound of this new record, it's hard to imagine a guitarist like Steve Gunn calling a place like New York his home. This album makes the listener yearn for exploration and adventure, as the title 'Eyes on the Lines' hints, this organic focus on traveling and exploring is a large theme easily picked up during this album.

"While Gunn's work is sometimes challenging and often ingenious - he is a practiced and skilful guitarist - it is also hugely pleasurable to consume." - The New Yorker