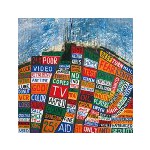 Radiohead
Hail To The Thief

Radiohead's admittedly assumed dilemma: how to push things forward using just the right amounts of the old and the older in order to please both sides of the divide? Taking advantage of their longest running time to date, enough space is provided to quench the thirsts of resolute Bends devotees without losing the adventurous drive or experimentation that eventually got the group into hot water with many of those same listeners. Guitars churn and chime and sound like guitars more often than not; drums are more likely to be played by a human; and discernible verses are more frequently trailed by discernible choruses.

So, whether or not the group is to be considered "back," there is a certain return to relatively traditional songcraft. Had the opening "2 + 2 = 5" and "Sit Down. Stand Up." been made two years before, each song's slowly swelling intensity would have plateaued a couple minutes in, functioning as mood pieces without any release; instead, each boils over into its own cathartic tantrum. The spook-filled "Sail to the Moon," one of several songs featuring prominent piano, rivals "Street Spirit" and hovers compellingly without much sense of force carrying it along. Somewhat ironically, minus a handful of the more conventionally structured songs, the album would be almost as fractured, remote, and challenging as Amnesiac. "Backdrifts" and "The Gloaming" feature nervous electronic backdrops, while the emaciated "We Suck Young Blood" is a laggard processional that, save for one outburst, shuffles along uneasily. At nearly an hour in length, this album doesn't unleash the terse blow delivered by its two predecessors. However, despite the fact that it seems more like a bunch of songs on a disc rather than a singular body, its impact is substantial. Regardless of all the debates surrounding the group, Radiohead have entered a second decade of record-making with a surplus of momentum.
4 / 5 All Music Guide.