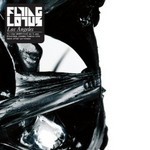 With the Reset EP released October last year and his bootleg mixes of everyone from KELIS to MR. OIZO and MADVILLAIN circulating amongst the heads, FLYING LOTUS' name is on the lips of many as the leader of a new generation of artists emerging from California. A movement that has captured attention worldwide, fuelled by hip-hop and cutting-edge dance music, FLYING LOTUS is redefining the sound of LA.

Flying Lotus is a man of many sides; from the huge sounding collabs and remixes giving indication of the slickest productions you are likely to hear on radio to his high voltage live shows which are somewhere between the best ever house party DJ and the most crowd-smashing live electronic act you've seen, to this new album proper - 'Los Angeles' - a deep, soulful, intricate album where glints of detail are unearthed to make this opus richer on every listen.

Of course, it's no secret that Lotus is the product of a rich musical lineage and Auntie's Harp serves not only as a collaboration with his majestic aunt (ALICE COLTRANE), but also a more fitting tribute. Testament arrives as the intro to Fly Lo's collaborator GONJA SUFI in all his mage-like splendor. Like DR. DRE & SNOOP DOGG, TIMBALAND & MISSY or BETH GIBBONS & GEOFF BARROW, the pairing of a pioneering producer & entirely distinct vocalist/songwriter is a force to be reckoned with. The feeling is only amplified with the closing opus Infintum.

Enveloping vocalist LAURA DARLINGTON in a track that bridges GAINSBOURG / BARDOT territory with BROADCAST and shape-shifting post-modern R&B, it is a sublime bookend to Brainfeeder and serves as the perfect FIN to Los Angeles epic journey.