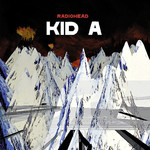 1997's OK COMPUTER turned the rock world on its ear by bringing visionary neo-prog rock touches to a Britpop format. Consequently, KID A was one of the most anticipated releases of its era, especially since Nigel Godrich, the man behind the mixing desk for the previous album, was again on hand for this outing.

On KID A, Thom Yorke's passionate wailing is put through the aural wringer, and the band's previous nimbly orchestrated full-frontal sonic assault is replaced by full-frontal electric piano, to iconoclastic effect. The ambient underpinnings and garbled vocals of "Everything in Its Right Place," and the instrumental "Treefingers," the electronic beats of "Idioteque," and Yorke's processed voice on the title track will come as quite a shock to die hard '70s rockers who spent the late '90s deifying Radiohead as heirs to the Pink Floyd throne. But these touches work brilliantly, while the more organic elements, such as the jazzy horn section on "The National Anthem," and the comparatively conservative arrangement (though there's some unsettlingly atonal orchestration lurking here, too) of "How to Disappear Completely" provide a counterpoint to all this incipient modernism.