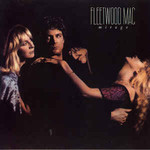 After the experimental approach taken on their previous record, Tusk, Fleetwood Mac returned to the pop songcraft of Rumours. With a slick production reflecting the prevailing trends of the time, 1982's Mirage reconfirmed the band as one of the biggest selling acts of the 20th century. Spending 5 weeks at the peak of the Billboard 200, the songwriting duties again evenly spread. Lindsey Buckingham, Stevie Nicks and Christine McVie all saw their songs become hit singles with "Oh Diane", "Gypsy" and "Hold Me" all becoming radio staples within the 12 months following the album release.