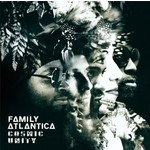 Award-winning, London-based Family Atlantica, are back with their second album 'Cosmic Unity', which follows on from their self-titled 2013 debut - an album that won the band a range of awards including Songlines Magazine's Best Newcomers 2015.

'Cosmic Unity', like the band itself, mirrors the mixed-up, intercontinental terrain of their home town. Moving through genres as diverse as psychedelic highlife, steel- pan Ethio-funk, calypso, biao and scorching equatorial jazz underpinned by deep afro-Atlantic dance rhythms. Lush strings and horn arrangements give way to acidic commentary on the immigration system and slavery as well as incantations of unity.

The diversity of the Family Atlantica project is reflected in the lyrics, with singing and poetry in Spanish, English, Yoruba and Portuguese. This is a rapid-fire, rhythm-heavy journey, simultaneously moving between the past and future of trans-Atlantic roots music.

"A borderline chaotic mix of highlife, Ethiopian jazz and Cuban rumba, along with a surface shimmer of 1960s psychedelia." - The Independent