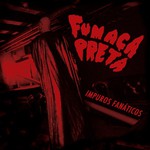 'Impuros Fanáticos' is the 2nd album from the indomitable Fumaça Preta.

Fumaça Preta (pronounced Foomassa Pretta - meaning "Black Smoke") started as a studio experiment when Alex Figueira, a Portuguese-Venezuelan producer and percussionist, invited some old friends to join him in the tiny analogue studio he built on the back of his house in Amsterdam.

Fumaca Preta are recognised for their spectacular and psychedelic live shows and if you close your eyes and listen to this album you are instantly transported into their crazy world.