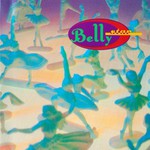 'Star' is the debut album by the American band Belly. It was originally released in 1993 and was an unexpected success, going Gold in the USA. Belly was formed in Boston, Massachusetts in 1991 by former Throwing Muses member Tanya Donelly (who was also in The Breeders). Donelly said they liked the name Belly because it was both pretty and ugly, an obvious reflection of their own music.

Side A:
Someone To Die For
Angel
Dusted
Every Word