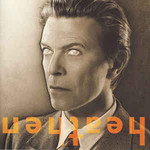 $18.00 In stock with supplier
ETA: 2-5 business days add to cart more by this artist

'Heathen' was David Bowie's debut album for Columbia Records, and it finds him in his best form in years. It contains songs that are haunting, mesmerising and contemporary without sacrificing the trademarks that made Bowie a musical legend.

"A masterpiece from a rock 'n' roll master. Throughout his recording career, David Bowie has never stagnated, consistently absorbing new ideas. He continues that tradition with 'Heathen'. It's exhilarating, but serious sounding. Bowie creates wonderful and sophisticated sound textures. The lyrics are simple, yet evocative. Bowie remains a master at this combination: hipness and artistic sensibility."
Jim Collins, Associated Press

Sunday
Cactus
Slip Away
Slow Burn
Afraid
I've Been Waiting For You
I Would Be Your Slave
I Took A Trip On A Gemini Spaceship
5:15 The Angels Have Gone
Everyone Says 'Hi'
A Better Future
Heathen (The Rays)