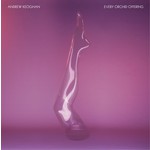 $35.00 In stock with supplier
ETA: 2-5 business days add to cart more by this artist

Every Orchard Offering' is a collection of 10 songs that seek to make sense of a peripatetic existence between New Zealand and New York, where Keoghan relocated in 2013.

"New Zealand singer Andrew Keoghan's background in opera and jazz certainly informs the sound of his recent "Stuck In Melodies." But the eerie electronic ballad, which will appear on Keoghan's forthcoming Every Orchid Offering, exists in a stylistic space of its own. If anything, it reminds me of David Bowie's similarly genreless ★ or the work of Kirin J Callinan, but possessed by an exquisite chamber-pop grace befitting Grizzly Bear or Dirty Projectors." - Steroegum

'Arctic Tales Divide shows Keoghan to be a spectacular talent whose art pop straddles genres, building an elaborate studio concoction where his multi-instrumentalism is used to best advantage' - Metro

'I can't remember when I last heard a local debut more assured or sophisticated as this one' - Nick Bollinger, RNZ

1.Everything
2.Every Orchid Offering
3.Stuck In Melodies
4.Queues At Dani Keys
5.No Simple Doll
6.Maning Bass Strait
7.Something Going On
8.They Don't Want A Boyfriend
9.Won't Let You Go
10.Running