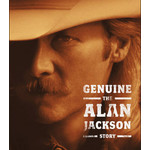 Genuine: The Alan Jackson Story is a definitive three CD career-defining anthology of music including 59 classic tracks, hits, rarities-including eight previously unreleased recordings. The collection celebrates his twenty-five years as a successful country artist. Unreleased tracks include a live version of The Eagles hit "Seven Bridges Road", recorded 18 years ago in Birmingham, Alabama, and a rare live rendition of "The Star Spangled Banner", recorded in 2001.