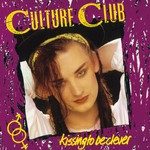 Kissing To Be Clever is the debut album by Culture Club. Originally released in 1982, it immediately put the band on the musical map. Turning the flamboyant Boy George into a star, the Soulful Pop outing incorporated elements of Pop, Rock, New Wave, Dance and Caribbean rhythms and sprouted several international hit songs.