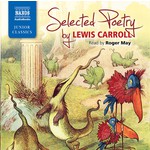 This production shows Lewis Carroll's wild imagination, affinity for satire, and skill as a writer as it explores some of his most famous poems, including "The Hunting of the Snark," and "Jabberwocky," as well as less-known works like "My Fairy," and "Brother and Sister." The works on this release span Carroll's entire writing career, from his earliest poems penned when he was only thirteen, to his most mature works. Roger May reads these poems with character and charm. Also included are verses from Carroll's most famous work, "Alice's Adventures in Wonderland," which has been constantly in print since its release, and has been translated into an astonishing 174 languages.

My Fairy
2 My Fairy

The Hunting of the Snark
13 Fit the First: The Landing
14 Fit the Second: The Bellman's Speech
15 Fit the Third: The Baker's Tale
16 Fit the Fourth: The Hunting
17 Fit the Fifth: The Beaver's Lesson
18 Fit the Sixth: The Barrister's Dream
19 Fit the Seventh: The Banker's Fate
20 Fit the Eighth: The Vanishing