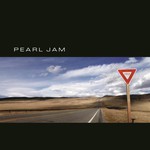 First time available on vinyl since initial release. On "Yield",

After the success of their debut album Ten and !993's Vs, Pearl Jam somewhat shunned the limelight with a more introspective sound across their next couple of releases, making for a more intimate listen than the aforementioned albums. Perhaps it was an intended move as the band, and in particular Eddie Vedder, had become increasingly uncomfortable with the pressures being lauded as "spokespeople of a new generation" can bring.

On Yield, the band sound like they've come to terms with their place in music history. Pearl Jam and Brendan O'Brien teamed up once again for a spirited session marked by the breakthrough of band members (guitarists Mike McCready and Stone Gossard, bassist Jeff Ament and drummer Jack Irons) bringing in finished songs for Vedder to add his signature lyrics to.

Given their longevity it's no surprise that different generations have alternative views as to which is the best Pearl Jam album. Yield can be rightly claimed as an essential part of the band's catalogue.

Side A:
Brain of J.
Faithful
No Way
Given to Fly
Wishlist
Pilate

Side B:
Do the Evolution
Untitled [Red Dot]
MFC
Low Light
In Hiding
Push Me Pull Me
All Those Yesterdays