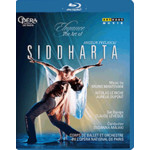 "Siddharta describes the spiritual journey of the Indian prince who would become the Buddha. At the ballet's opening we discover him at an opulent court celebration, where his father is urging him to assume his princely responsibilities. Unwilling to do so, Siddharta (Nicolas Le Riche) retires to the river to meditate. There he has a vision of his own spiritual awakening, in the form of a beautiful woman (Aurélie Dupont), surrounded by handmaidens.

Renouncing his former life, Siddharta dedicates himself to this vision, and he and his cousin Ananda (Stéphane Bullion) vow to live an ascetic existence. They weaken, however, and fall prey to two temptresses. Filled with remorse, the two men mortify themselves, and Siddharta is once again inspired by a vision of his ideal, who shimmers just out of reach. Finally, acknowledging that all earthly attachments are illusory, he achieves transcendence.

Those familiar with Swan Lake will note the many thematic echoes, and in its presentation of women as either agents of redemption or damnation - either white swans or black - this is as much a 19th as a 21st-century ballet. Preljocaj's choreography, however, has a wholly contemporary focus. His ensemble passages are unremarkable, and a cosmic disorder scene in which the forces of darkness wear black motorcycle helmets is just straight silly, but his duets for Le Riche and Dupont are mesmerisingly beautiful, as is the display of whirling, anguished athleticism in which Le Riche and Bullion express their morning-after remorse. Preljocaj's own long-term quest has been to harness the earthly, physical nature of dance to its metaphysical possibilities, and in these and similar passages he succeeds magisterially." (The Observer)