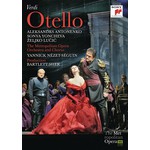 "Ms. Yoncheva, the fast-rising Bulgarian soprano, just 33, is poised for a major career, and this Desdemona shows why. Her luscious sound has just enough of an earthy tinge and texture to balance the shimmer of her singing. She excelled during the complex choral scene at the end of Act III, a high point of this production, magnificently staged. Before the assembled people of Cyprus and the visiting ambassador from Venice, Otello denounces Desdemona and, pulling her hair, yanks her to the ground. The shattered Desdemona expresses humiliation in anguished, pleading phrases. Ms. Yoncheva's soaring voice broke through the chorus, suggesting that maybe this sweet, loving wife had a capacity for defiance." New York Times