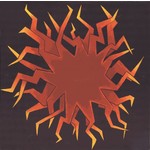 Sunny Day Real Estate
How It Feels To Be Something (LP)

The cryptically titled How It Feels to Be Something On was the first fruit of Sunny Day Real Estate's reunion, and it simultaneously smoothed out their sound while shifting it into something altogether more ambitious. Always somewhat arty and challenging to begin with, SDRE flirts with out-and-out prog rock here, cleaning up the production to reveal the contrasting layers in their ever more intricate arrangements.

There's a droning, almost Middle Eastern feel to some of the songs, pointing up Jeremy Enigk's newfound taste for spiritual mysticism (though the mantra-like chanting on "The Prophet" comes off a little awkwardly). Enigk has matured greatly as a vocalist, applying lessons learned from his solo project; gone is the strangled roar he frequently used on Diary, but even while confirming his softer bent, he's reined in the swooning, bordering-on-fey excess of LP2. Similarly, the band's musicianship keeps getting sharper, handling the twisting chord progressions with an easy grace that keeps the songs flowing smoothly into one another. Almost too smoothly, in fact -- if the album has a flaw, it's that the climactic peaks don't seem to scale quite the same heights as on the band's other albums.

That's a minor complaint, to be sure, but perhaps that's why How It Feels to Be Something On can feel at times like a dry run for the magnificently perfected The Rising Tide, where Enigk's piercing falsetto really hits its stride and where the band's songwriting fulfills their every anthemic ambition. But that's only in hindsight; taken on its own terms, How It Feels to Be Something On is a remarkable step forward from a band that seemed destined to leave its full potential untapped.
4 / 5 All Music Guide.