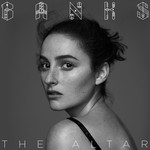 The follow up to Goddess was premiered by Zane Lowe with the first single 'Fuck With Myself' on which Banks gets straight to the point and it is haunting: "So I fuck with myself more than anybody else" she sings in that voice that's been alternately compared to Aaliyah, Fiona Apple, Kate Bush, Erykah Badu and Lauryn Hill.

"This song is about being your own best friend, your own mother, and your own lover," says Banks.

With the song, BANKS also premieres a chilling, distressing, even destabilising music video. Its stark depiction of her gyrating alone in a room flanked by contorted dancers, and literally beating herself up, is as mesmerising as it is menacing.