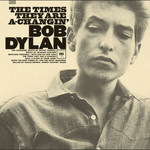 Bob Dylan
The Times They Are A Changin' (LP)

The Times They Are a-Changin' is Bob Dylan's third studio album, released in January 1964. It was the first Bob Dylan record to contain only original compositions. Songs like the title track, "Ballad Of Hollis Brown" and "North Country Blues" are staples in the Dylan canon.

The album made a big impact for its lyrical content, dealing with social-political issues and the times of upheaval in those early Sixties. The Times eventually went Gold but moreover, it remains a timeless classic.

SIDE A
1. The Times They Are A Changin'
2. Ballad Of Hollis Brown
3. With God On Our Side
4. One Too Many Mornings
5. North Country Blues

SIDE B
1. Only A Pawn In Their Game
2. Boots Of Spanish Leather
3. When The Ship Comes In
4. The Lonesome Death Of Hattie Carroll
5. Restless Farewell