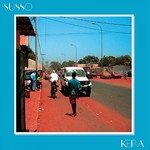 Susso is a collaborative project between the members to the celebrated Suso /Susso and Kuyateh griot (musician and storytellers) families and UK bassist/ producer Huw Bennett. The music is inspired by, and directly samples the magnificent sounds of the Mandinka people, recorded in Gambia, 2013. Initially traveling with the aim to gain perspective as a musician and to discover a new world of music first hand, Huw found himself humbled by such a welcoming community of artists. Huw's guide and teacher of traditional Mandinka repertoire was Yusupha Suso (who features heavily on the album), son of internationally renowned griot Mawdo Suso and master balafon in his own right. In return Huw was found a bass guitar and asked to perform with the families band, fronted by Yusupha's Mother and his sisters.

The tracks are composed entirely from original source material and Huw's talents as a producer and multi-instrumentalist; performing tuned percussion brought back from the region including the 21 keyed Mandinka balafon, Kutiringding drum, as well as drawing on his skill as a professional upright/ electric bassist. The beat and jazz scene happening in Huw's current home of South East London of course influences the music produced, but through Huw's conscientious and sensitive approach, the traditional sounds are treated with respect and retain a true Gambian aesthetic.