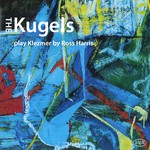 "As someone who usually writes music for the concert hall, what is the appeal of klezmer? Because I have always been interested in the work of artists like Gustav Mahler, Woody Allen, Hannah Arendt, Paul Celan, The Cohen Brothers, and Tony Judt (and having a small accordion tucked away unused) the invitation to join a klezmer band seemed intriguing. It changed my life.

The original tunes that evolved in the Shtetls of Eastern Europe and found their way out into the world through Jewish emigrants were very direct and emotionally powerful folk music. I found the characteristic modes interesting but mostly enjoyed the unusual juxtaposition of chords and melody. I couldn't help dabbling and soon enough The Kugels had about thirty of my melodies in their repertoire to go with traditional tunes. This CD is a collection of my pieces." - Ross Harris 2016

"Producer and engineer Wayne Laird must be applauded for the clarity of the recorded sounds. Verdict: Let's hear it for klezmer!" Otago Daily Times