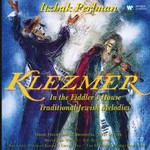 Itzhak Perlman's parents were from Poland and in these albums he explores the secular music of Eastern Europe's Jews. Its sinuous melodies and piquant harmonies fuse elements of Slavic, Balkan, Greek and Turkish music - and, in its American evolution, even jazz.

Itzhak Perlman was born in Israel in 1945 and moved to the USA in 1958, where he trained at the Juilliard School in New York. His success in winning the prestigious Leventritt Competition in 1964 launched his international career through which he has become known as one of the world's leading musicians.

Itzhak Perlman has appeared with every major orchestra and in recitals and festivals throughout the world. In November 1987 he joined the Israel Philharmonic for history-making concerts in Warsaw and Budapest, representing the first performances by this orchestra and soloist in Eastern block countries. He again made history as he joined the Israel Philharmonic for its first visit to the Soviet Union in April 1990 with concerts in Moscow and Leningrad. In recent years Perlman has continued to perform with leading orchestras in addition to touring major cities throughout the world with his accompanists Bruno Canino and Samuel Sanders. In 1996 Perlman's engagements included concerto and recital appearances throughout Europe, Asia and North America, including appearances with many of the world's foremost orchestras and composers.

Itzhak Perlman's extensive repertoire is well represented on EMI Classics. The great violin concertos form the core of his recorded repertoire, which ranges from the baroque to the contemporary. His recorded repertoire for EMI Classics includes violin concertos by Bach, Beethoven, Brahms, Bruch, Dvorák, Glazunov, Goldmark, Khachaturian, Korngold, Mendelssohn, Paganini, Prokofiev, Sibelius, Shostakovich, Tchaikovsky and Vivaldi. Perlman's chamber music recordings include Beethoven Piano Trios with Vladimir Ashkenazy and Lynn Harrell; Beethoven String Trios with Pinchas Zukerman and Lynn Harrell; Brahms Violin Sonatas with Vladimir Ashkenazy; Dvorák's Sonatina and Smetana's From my Homeland with Samuel Sanders; the Tchaikovsky Piano Trio with Vladimir Ashkenazy and Lynn Harrell and a solo disc of the Paganini Caprices. Popular repertoire includes Tradition, a collection of Jewish melodies; Together, a programme of duets with Placido Domingo, issued as a tribute to Fritz Kreisler and John McCormack; Rag-Time Music accompanied by André Previn and a disc entitled My Favourite Kreisler with Samuel Sanders.

A documentary of Perlman's historic trip to the Soviet Union with the Israel Philharmonic, entitled Perlman in Russia, was honoured with one of the very highest accolades of the media world: the 1992 Emmy Award for Outstanding Classical Programme in the Performing Arts. This EMI Classics video charts Perlman's visit to Moscow and Leningrad - a visit which coincided with the 150th anniversary of Tchaikovsky's birth. The documentary shows Perlman honouring the composer's grave and he also gives a performance of the Tchaikovsky Violin Concerto in the Bolshoi Philharmonic Hall, St Petersburg, accompanied by Zubin Mehta and the Israel Philharmonic.

In June 1990 Itzhak Perlman signed a new five-year contract with EMI Classics, for a minimum of ten recording projects. November 1992 saw the release of the Brahms Violin Concerto with the Berlin Philharmonic conducted by Daniel Barenboim: a performance which was subsequently released on Laserdisc and VHS, together with the Beethoven Violin Concerto. A rare coupling of the Ben-Haim and Castelnuovo-Tedesco concertos, recorded with the Israel Philharmonic and Zubin Mehta, was released in Spring 1993, as was The Art of Itzhak Perlman, a four-CD edition celebrating the range of his EMI Classics recordings, chosen by Perlman himself, to mark his 21 years with the label. In 1994 a 2CD set of Brahms Piano Trios was released on EMI Classics, for which Perlman was joined by Vladimir Ashkenazy and Lynn Harrell, and Perlman's recital album with Samuel Sanders, entitled Bits and Pieces was released in August 1994.

During 1995 Itzhak Perlman featured as EMI Classics' 'Artist of the Year', particularly appropriate as 1995 was also the year of his 50th birthday. EMI Classics celebrated his birthday with the release of an album of personally selected encores, accompanied by orchestra and also released Perlman's first ever recording of the Barber Violin Concerto. The disc entitled 'The American Album' also featured works by Bernstein and Foss. May 1995 saw the release of 'The Itzhak Perlman Collection' a 20 CD box set comprising a definitive collection of great violin music. The comprehensive selection of violin works included recordings of the major baroque, classical, romantic and 20th century concertos, alongside chamber and instrumental works by this great artist. This disc also featured a selection of Perlman's favourite violin repertoire including works by Sarasate, Wieniawski, Kreisler and Tchaikovsky. In November 1995 EMI Classics issued (on CD and video) a live recording of Beethoven's Triple Concerto, recorded at a concert Perlman gave with Daniel Barenboim, Yo-Yo Ma, and the Berlin Philharmonic in January 1995.

In addition, Itzhak Perlman has teamed up with four renowned Klezmer bands to create a soulful, passionate CD of Klezmer music titled In the Fiddler's House. In the Fiddler's House was first released in the United States in adjunct to a Great Performance special broadcast on PBS. Perlman says that this traditional Jewish East European music has "accented the celebrations of my life: births, bar mitzvahs, weddings and parties of all description. Klezmer music is in my blood". The album was released in February 1996 and proved such a success that in January 1997 it was followed by a second disc of Klezmer music, entitled 'Live in the Fiddler's House'. His most recent release with EMI Classics in March 1999 is a disc entitled Concertos from my Childhood with the Juilliard Orchestra and Lawrence Foster which features many "student" violin pieces, which Perlman himself studied at the Juilliard School of Music in America and was the subject of a PBS TV documentary. Perlman is also the focus of a multimedia CD-ROM entitled 'Interactive Tchaikovsky' which was produced by Robert Winter and Jay Heifetz of Calliope Media.

Itzhak Perlman's hold on the public imagination stems from a unique combination of talent, charm and humanity unrivalled in our time. His personality has created an artistic force of compelling nature. Audiences all over the world respond not only to his flawless technique but to his irrepressible joy of making music which he communicates so effectively. Harvard University, Yale University, Braendis University, Yeshiva University and Hebrew University in Jerusalem are among the institutions which have awarded Perlman honorary degrees. President Reagan presented a Medal of Liberty to Perlman in 1986 in appreciation of his outstanding achievements and contribution to American life and Perlman has also won numerous awards for his recordings including, in 1991, a Grammy for his EMI Classics recording of Shostakovich's 1st Concerto and the Glazunov Concerto.