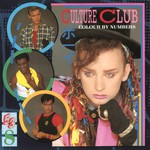 Colour by Numbers was Culture Club's most successful album, and can even be considered as one of the most popular albums from the 80s in general. Scoring no less than five hit singles, this set of songs dominated the charts for a full year, both in the US and in Europe.