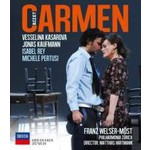 Kaufmann, in the guise of a Spanish police officer, brilliantly portrays the blustering but naive Don José as a modern contrast of hard-edged machismo and out-of-his-depths vulnerability.

Director Matthias Hartmann refreshed one of the greatest and most popular operas of all time with touches of a contemporary setting and costume designs that emphasize the timeless archetypes of the characters. This production of Carmen enthralled audiences with the visceral physical quality of the performances, enhanced by a single panoramic set for all four acts that is stripped of the traditional Spanish styling.

Kaufmann superbly presents Don José as awkward, socially inept and doomed for disillusionment. Kasarova's Carmen commands attention with a soft and sensual exterior that hides her ruthless and sinister heart in plain view.

"Kaufmann is an immaculate Don José, living each turn of the drama vocally...However, it's [Kasarova's] Carmen who makes this production unforgettable. Not just her smoky mezzo dipping down into the chest register in the Habanera, but her gifts are an actress...All praise, too, for conductor Franz Welser-Möst and the Zurich Opera House Orchestra." Five Stars BBC Music

"[Kaufmann] is his usual magnificent self. He looks great and the voice is on superb form, able to spin out long, legato lines softly and to release cascades of power when needed...Pertusi's Escamillo is bull-headed, but he sings the role handsomely...Isabel Rey's Micaela is stereotypical but well sung." International Record Review