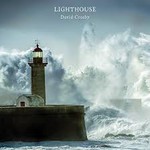 Lighthouse is the result of a 12-week collaboration between Crosby and Snarky Puppy member Michael League - and a set of songs he deems "one of my best records ever."

Although Crosby tends to let extended periods of time lapse between solo projects, Lighthouse arrives just a couple of years after his most recent release, 2014's Croz - and he says that's no accident. "My writing always comes in bursts, but for the last couple years, I've had this inexplicable surge," he explained. "Probably the densest and longest surge I've had, which at this stage in the game is a miracle. I can't explain why that would happen except that I'm happy. I'm a very happy guy. That may be the key to the whole deal."

Calling League "an immensely talented musician," Crosby admitted he entered into their collaboration without fully understanding the breadth of his talents, but said by the time they were finished, he felt a songwriting kinship on par with the one he's developed with his son James. "I love writing with someone else," mused Crosby, "because the other guy always thinks of something you didn't."

He's completed "an intimate, stripped-down set that highlights David Crosby's instantly recognizable voice, incisive songwriting, and incomparable guitar work," according to the record's press release. "There's a sparse, unvarnished quality to the tracks that allows the songs breathing room and for the full emotional weight of the lyrics to emerge, unencumbered by extraneous instrumentation."