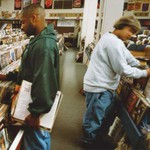 2016 was a stellar year for experimental hip hop luminary DJ Shadow, aka Josh Davis, with the release of his critically acclaimed studio album The Mountain Will Fall - his first release in five years - drawing praise from all corners, from the Guardian who called the record "impressive in its inventiveness" to MOJO who claimed "Shadow is back in the frame" and AV Club who hailed it as "DJ Shadow's best work since his early-aughts heyday".

For many, it is Shadow's 1996 debut album Endtroducing that they keep on going back to, widely regarded as a groundbreaking release that paved the way for experimental hip hop and changed the shape of electronic music from that point on. This year marks 20 years since that pivotal release, and to mark the occasion the San Francisco-based producer has announced a special 20th Anniversary Endtrospective Edition featuring the original album, a collection of demos, alternate takes and live versions titled 'Excessive Ephemera' and 12 specially commissioned remixes from some of contemporary electronic music's leading lights including Hudson Mohawke, Clams Casino, Salva, Prince Paul, Bondax & Karma Kid and more.