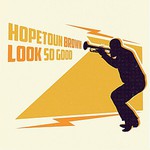 Just 12 short months after the success of their first album "Burning Fuse", Tim Stewart and Nick Atkinson have come up with something special for their second Hopetoun Brown album. They've pulled in dynamite guests and they've splashed more time in the studio than ever before.

You might nod to the fat swing of Lawrence Arabia drummer Al Deverick or you can sigh hearing the soaring backing vocals of Marlon Williams. This album is peppered with star turns from some of Hopetoun's closest collaborators. Tami Neilson and Tim Stewart co-wrote the first single Hate I Don't Love You and the two hottest brass players in the country, Finn
Scholes and Kingsley Melhuish, have added new depths to the already stonking arrangements. Delaney Davidson's drummer Joe McCallum brings his sizzling high-hats and bouncing cowbells while Aldous Harding joins the party for a few shouts on one of the tracks expertly engineered by Lyttelton recording prodigy Ben Edwards. You'll hear Atkinson on the piano and Scholes on the Vibes and the organ. Stewart's tonsils are now highly polished after hundreds of gigs up and down the nation and the glue that holds this act together, a bass clarinet, of all instruments, beguiles with it's unique tone. Funk to the hip hop influences, bathe in the harmony of trumpets, have your ears pinned back by huge trombones and tubas and bounce all night as three different drummers vie for your shake time on this brand new record.