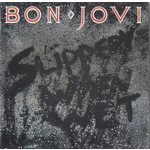 Slippery When Wet is the third studio album by Bon Jovi which was an instant commercial success and featured the group's most well-known tracks, "You Give Love a Bad Name", "Livin' on a Prayer" and "Wanted Dead or Alive". Slippery When Wet was awarded with certification of 12× Platinum, making it one of the top 100 best-selling album in the United States.