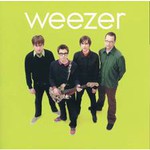 There's a reason why Weezer's third album consciously recalls the band's first, not just in its eponymous title, but in its stark cover, Ric Ocasek production, and tight pop songs. That's not because Weezer was trying to recapture its core audience, because, unbeknown to the band, it already had. Once its second album, Pinkerton, stiffed on the charts and was lambasted in the press (including an devastatingly unfair pan from Rolling Stone, who named it the worst album of 1996), the group dropped out of sight and leader Rivers Cuomo went into seclusion. Remarkably, the group's following, unlike so many of its peers -- from forgotten label-sponsored alt-rockers like Nada Surf to indie rockers as respected as Sebadoh -- never waned, it only strengthened, as fans slowly realized the brilliance of Pinkerton and how the debut only seemed better, catchier, funnier as the years passed.

Weezer eventually realized this through the magic of the Internet (plus an uproarious Japanese tour), and hit the road in 2000, knocking out a new album at the end of the year, when the band realized that there were thousands of fans eager to hear a new record. The cynical out there might interpret this as crass commercialism -- "hey! they only made a record when they realized people were listening" -- but it's actually a reflection of one of Weezer's greatest strengths: Cuomo's shyness and awkwardness, neither of which he can disguise, no matter how he tries. He didn't want to record another album unless he knew somebody was listening, because he didn't know if there was a purpose otherwise. This is the quality that came shining through on Pinkerton (and is most likely the reason he disdains the album as too personal, no matter how great it is), and it's also apparent on this Weezer album (which will inevitably be known as The Green Album, much like how fans dubbed the debut The Blue Album, due to its cover background), even if he consciously shies away from the stark autobiography that made the previous album. Sure, there may be clues tucked away in any of these songs, but for the most part, this is simply a collection of punk-pop songs in the now-patented Weezer style. And that, quite frankly, is more than enough.

This may be a very short album -- a mere 28:34, actually -- but that just makes it bracing, a reminder of how good, nay, great this band can be. Especially since this is a conscious return to the band's debut, this may seem like nothing special -- it's just punk-pop, delivered without much dynamic range but with a whole lot of hooks -- but nobody else does it this so well, no matter how many bands try. And, frankly, that's enough, because this band rocks tight and focused, with wonderful melodies and songs that have enough little details to give them personality, even when Rivers is avoiding personality. This is a combination of great performances and great songwriting, something that puts to shame both the mainstream rockers and underground wannabes of the early 2000s. That's Weezer's great strength -- they certainly are accessible, but they're so idiosyncratic within that realm, it's hard not to think of them as outsiders. The fact that this Weezer sounds as fresh as the first is as much a testament to the band's talents as the musical stagnation of the post-grunge, post-Brit-pop '90s, but three albums out, Weezer has yet to deliver a record that isn't immensely satisfying.

Side A:
Don't Let Go
Photograph
Hash Pipe
Island In The Sun
Crab