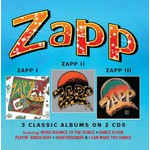 There must be something in the air in and around Dayton Ohio, as they really like to get down with the Funky sound. Robinsongs is proud to present the first three albums by Zapp on a double CD format.

Zapp "1" featured the R&B Smash 'More Bounce To The Ounce' and this reissue also includes as a bonus track the 7" version. "1" went Top 20 in the Billboard album chart, the album was produced by William "Bootsy" Collins from Parliament, Funkadelic & Bootsy's Rubber Band fame, "Bootsy" also plays Bass on the album.

Zapp "3" features a Top 10 R&B single with 'I Can Make You Dance' and the Top 20 hit 'Heartbreaker', with the 7" version included here as a bonus track.

Zapp features the brothers Roger, Lester, Larry & Tony Troutman. Roger Troutman also recorded several successful solo albums as well, but all the albums featured the Talk Box, which made Zapp so distinctive. And the band were heavily sampled most famously by 2 Pac on the smash 'California Love', for which Roger received a Grammy nomination.