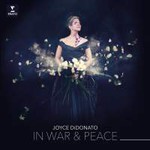 "Perhaps my most personal project to date," is how American mezzo-soprano Joyce DiDonato describes In War and Peace: Harmony through Music. Her ambitions for this collection of arias from Baroque operas are substantial. Surrounded as we are by instability, she hopes it will help us find an answer to a vitally important question: "In the midst of chaos, how do you find peace?"

Her aim is to "steer conversation and discourse … to help all of us find peace in our lives in a dynamic way … As I have tried to convey in this selection of music, the power to bravely tip the scales towards peace lies firmly within every single one of us."

DiDonato, an opera singer who certainly does not live in an ivory tower, was motivated to assemble the programme after the terrorist attacks in Paris in November 2015. She had been planning an exploratory album with an emphasis on rare arias, but in the light of the tragic events she rethought her approach, giving it wider and deeper implications.

In War and Peace: Harmony through Music was recorded with Il Pomo d'Oro under its principal conductor Maxim Emelyanychev. The programme comprises 15 arias divided into two sections: 'War' and 'Peace'. Both contain music by Purcell and Handel - including, to close 'War', Dido's dignified, but searing lament from Dido and Aeneas and Almirena's haunting and heartbreaking 'Lascia ch'io pianga' from Rinaldo. An excerpt from Monteverdi's Il ritorno d'Ulisse is included in 'Peace', which concludes with Cleopatra's spirited and defiantly optimistic 'Da tempeste il legno infranto' from Giulio Cesare.

A further aria from Giulio Cesare is the bonus track for the album; it is Sesto's touching apostrophe to hope, 'Cara speme', which Joyce DiDonato sings unforgettably on a floating whisper of breath.

In her search for peace and harmony, the American singer did not entirely desert her musicological quest, and the album also contains no fewer than three world premiere recordings: a 'War' aria from Andromaca by the Neapolitan composer Leonardo Leo (1694-1744), and two 'Peace' arias, from the operas Attila and Attilio Regolo, by another Neapolitan, Niccolò Jommelli (1714-1774).

When Baroque opera was at its height, the highly stylised art form was famously described by the English writer Dr Samuel Johnson as "an exotic and irrational entertainment which has always been combated, and always has prevailed". It is nearly three centuries since he made that judgement, but opera has continued to prevail - by impassioning performers and thrilling and moving audiences: nothing rivals it in giving intense, compelling expression to matters of life, love and death. Over recent decades, opera of the Baroque era has gained a new and vigorous life, with frequent revivals of works by such masters as Handel, Monteverdi, Vivaldi and Purcell, and the rediscovery of operas by composers who had fallen into obscurity.

Fuelled by these arias, Joyce DiDonato is fervently committed the cause of engaging the hearts and minds of music-lovers around the world. As she leads the way forward, long may opera - and peace - prevail.

"DiDonato brings technical security and a variety of tonal colours to each aria. Il Pomo d'Oro offer bristling accompaniment under principal conductor Maxim Emelyanychev. Purists may quibble here and there, but it's hard to resist DiDonato's heartfelt message." The Guardian, 30th October 2016 ****

"DiDonato is always a force to be reckoned with and there is plenty of dramatic gusto here, as well as vocal fireworks...I found her at her most fiery and persuasive - the same goes for the orchestra - in the three world-premiere recordings, taken from Niccolò Jommelli's Attilio Régolo and Leonardo Leo's Andromaca." The Times, 4th November 2016 ***

"In War & Peace' finds DiDonato back on Baroque ground for the first time in a while, and it's a joyful musical homecoming. ...Drama, as ever with DiDonato, is everything. Ornamentation serves narrative first, ego second." Gramophone Award WINNER 2017 - Recital

"[In 'Lascia ch'io pianga'] she washes just enough color out of her voice to achieve a purity that enhances the composer's signature formula of gut-wrenching despair set to music of extraordinary beauty...DiDonato also can rage with the best, hurling words like knives in an aria from Leonardo Leo's long-forgotten "Andromaca."" Washington Post, 16th November 2016

"DiDonato kicks up a storm in the war arias and soothes the spirit with lambent tone when she turns to peace. The American mezzo is at the peak of her career. This disc is worth hearing for her radiant singing in Handel's Susanna alone." Financial Times, 4th November 2016

"Though the top of her voice is wiry under pressure, her coloratura is tightly sprung, her diction is flawless, and her phrasing of the often underrated poetry is sympathetic and sophisticated…Il Pomo d'Oro plays with Handelian zip under its new director, Maxim Emelyanychev" BBC Music Magazine, Christmas 2016 ****

"[DiDonato is] a singer not afraid to let simplicity speak for itself…she takes her programme beyond the obvious binary opposition into a series of contrasts and emotional conflicts…[her] vocal attack is fearless, her range of vocal colours immense - not many singers would risk such extremes of dynamics and manipulation of vibrato without sounding mannered, but somehow she pulls it off" Opera Now, January 2017 *****

Purcell:
They tell us that your mighty powers, Z630
When I am laid in earth (from Dido and Aeneas)
O lead me to some peaceful gloom (from Bonduca or The British Heroine, Z574)

Why should men quarrel? (from The Indian Queen, Z630)