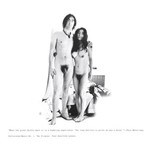 Turns out the very sound of falling in love is just as abstract, subjective and loopy as the concept itself. Yoko Ono and John Lennon are two of history's greatest lovers, and Two Virgins is the document of the pair falling in love in real time. The album is a curious and amazing suite recorded over one weekend in Spring 1968 at Lennon's Kenwood home: Distant conversations; comedic role playing and footsteps; laughter, birdcalls and plunking piano lines; silly songs and space; tape delay stretching shrieks, bass rumbles and moans to the moon and back again.

The now-iconic cover (featuring Ono and Lennon standing nude together) notwithstanding, nothing about Two Virgins is safe. It would be a risky move today for artists in the larger, pop culture conversation just as it was a risky move in 1969. But this is an uncomfortably private, two-person dialogue about-and celebration of -experimentation, inspiration and play. And these two souls bravely let us look through the keyhole.