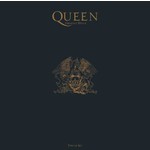 Greatest Hits II is a compilation album by Queen, released in 1991. It reached No. 1 on the UK Album Chart, and is the tenth best-selling album in UK Chart history with sales of 3.9 million copies (as of 2014), and has sold 19 million copies worldwide. The compilation contains most of Queen's hits from 1981 to 1991. It was released less than a month before the death of lead singer Freddie Mercury and was the last Queen release while he was still alive.