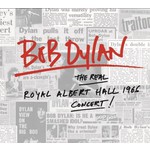 Side A:
She Belongs To Me
Fourth Time Around
Visions Of Johanna
It's All Over Now, Baby Blue

Side B:
Desolation Row
Just Like A Woman
Mr. Tambourine Man

Side C:
Tell Me, Momma
I Don't Believe You (She Acts Like We Never Have Met)
Baby, Let Me Follow You Down
Just Like Tom Thumb's Blues
Leopard-Skin Pill-Box Hat

Side D:
One Too Many Mornings
Ballad Of A Thin Man
Like A Rolling Stone