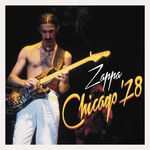 Recorded September 29, 1978 at the Uptown Theatre in Chicago, the aptly-titled two-disc album, Chicago '78, captures in great sound quality the second of two shows played that night in its entirety, a rarity for Zappa recordings. The concert delivers with a good blend of fan favorites, blistering guitar solos, audience participation, on-the-spot improvisations and stellar playing from Zappa and his talented band. Notably, the album includes rare live versions of "Yo Mama" and "Strictly Genteel" and a spontaneous improv by Zappa where he plays riffs that would end up turning into the future songs "I'm A Beautiful Guy" and "Crew Slut." Due to only having one tape machine rolling at a time and the length of the recording time, the live performance was recorded on three different sources. In order to present this show in its entirety, it was culled from the three different sources: Main Source: ½-inch 4-Track analog tape masters; Secondary sources: ¼-inch 2-Track reel to-reel analog tape masters and a board cassette. All tapes were heat-treated and transferred at 96K 24B .WAV by Joe Travers.