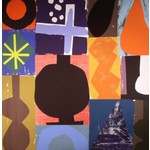 Over 20 years ago, Mr Bongo were one of the key global forces in opening up people's ears to the sounds of funk and soul from around the globe - digging up rare nuggets from out of the way places that might have echoed American styles, but turned them on their ear - or the kinds of cuts that were completely unique, but which could stand next to the kind of funky 45s that were being sampled for hip hop!

This collection brings together some of the best cuts that continue that legacy - some rare singles, some obscure European tracks, and lots of others you never would have discovered otherwise - with titles that include "Deixa A Tristeza", "Piranha" by Alipio Martins, "Seara De Oxala" by Barbosa, "Mathar" by Dave Pike Set, "Freak" by Tappa Zukie, "Mama Hot Daddy Cool" by Big Youth, "Fish & Funjee" by Lantei Lamptey, "Karam Bani" by Buari, "Handsome Boy (parts 1 & 2)" by The Rwenzoris, "He's Forever" by King James Version, "Chanson D'Un Jour D'Hiver" by Cortez, and "Can't Live Without You" by Connie Laverne.