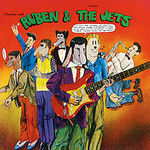 Cruising with Ruben & The Jets is the fourth Mothers of Invention album. Released at the end of 1968, the concept album was written in the style of 1950s doo-wop and classic R&B, a childhood love of Zappa's and members of the band, including singer Ray Collins, who all came up with the idea while in the studio recording other music. It is being reissued with the original 1968 mix from the master analog tape on 180-gram vinyl.