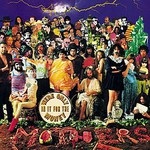 In the top 300 of Rolling Stone's 500 greatest albums, We're Only In It for the Money is a scathing satire of right-versus-left politics that's as fresh in today's charged political atmosphere as it was upon release in 1968. In part a parody of Sgt. Pepper's Lonely Hearts Club Band, the album pits the hippies against the squares, skewering them equally, as pawns held sway by corporate sellouts catering to the masses in the name of profit. The restored original 1968 mix is pressed on 180-gram vinyl from FZ's approved Digital Master.