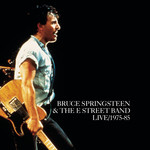 To say that Bruce Springsteen's live shows with the E Street Band were legendary is the height of understatement. On a good night, the set might extend to three and four hours of exhilarating, pulse-pounding rock & roll. How best to capture that on CD? Or was it possible at all? As it turns out, Live 1975-1985 comes as close to the experience as possible. Culling material from various tours and settings ranging from small rooms to stadiums, the three-CD set emphatically displays Springsteen's charisma as a bandleader and storyteller and makes plain the sheer power of the E Street Band. Some of the many highlights here include covers of Edwin Starr's "War", Tom Waits' "Jersey Girl", and Woody Guthrie's "This Land Is Your Land" and rare versions of originals such as "Because the Night", "Fire,", and "Seeds". All the hits are here as well, so if you never saw Springsteen and the E Streeters back then, you might still get your chance. But this set chronicles a special time in the life of a special performer.