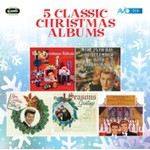 We begin the festivities with, who else, but the King, Elvis Presley's classic Christmas collection from 1957. Listen in wonder as Elvis takes you from a "Blue" to a "White Christmas" and concludes the set with four classic gospel numbers featuring The Jordanaires and including beautiful renditions of "I Believe" and "(There'll Be) Peace In The Valley". Bobby Darin follows with his 1960 festive contribution "25th Day of December" with songs perhaps of a little more serious nature than the traditional Christmas fayre, however, we think a very interesting album all the same. Next it's back to festive fun with a very hard to find Bobby Vee album from 1962 "Merry Christmas From Bobby Vee". Here we return to jolly songs of Christmas celebration like "Jingle Bell Rock", "Winter Wonderland" and "Silver Bells". The Four Seasons follow with a very early album in their career from 1962, "The Four Seasons Greetings". Here the boys cleverly split the album into two distinct sides, the first side being a traditional set of carols including "What Child Is This" and "The Excelsis Deo Medley" while the second side finds the guys enjoying a set of "popular perennials" such as "I Saw Mommy Kissing Santa Claus" and "Santa Claus Is Coming To Town". Last, but by no means least we present from 1962, "Christmas With The Everly Brothers" on which you will hear the beautiful harmonies of the greatest double act in pop music singing some to the most famous traditional Christmas songs of all time from "The First Noel" and "Silent Night" to "Hark The Herald Angels Sing" and "O Little Town Of Bethlehem".

CD2
1-4: 'Bobby Vee: Merry Christmas From Bobby Vee'
1. Winter Wonderland
2. Blue Christmas
3. Silent Night
4. (There's No Place Like) Home For The Holidays
5-17: 'The Four Seasons: The Four Seasons Greetings'
5. The Merry Christmas Medley
6. What Child Is This
7. The Carol Of The Bells
8. The Excelsis Deo Medley
9. The Little Drummer Boy
10. The First Christmas Medley
11. Joy To The World Medley
12. Santa Claus Is Coming To Town
13. Christmas Tears
14. I Saw Mommy Kissing Santa Claus
15. The Christmas Song
16. Jungle Bells
17. White Christmas
18-29: 'Everly Brothers: Christmas With The Everly Brothers'
18. Adeste Fideles (O Come All Ye Faithful)
19. Away In A Manger
20. The First Noel
21. God Rest Ye Merry Gentlemen
22. What Child Is This?
23. Silent Night
24. Hark! The Herald Angels Sing
25. Angels From The Realms Of Glory
26. Deck The Halls With Boughs Of Holly
27. Bring A Torch, Jeannette, Isabella
28. O Little Town Of Bethlehem
29. We Wish You A Merry Christmas