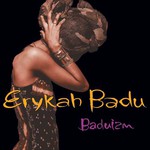 Two years after D'Angelo brought the organic sound and emotional passion of R&B to the hip-hop world with 1995's Brown Sugar, Erykah Badu's debut performed a similar feat. While D'Angelo looked back to the peak of smooth '70s soul, though, Badu sang with a grit and bluesiness reminiscent of her heroes, Nina Simone and Billie Holiday. "On & On" and "Appletree," the first two songs on Baduizm, illustrated her talent at singing soul with the qualities of jazz.

With a nimble, melodic voice owing little to R&B from the past 30 years, she phrased at odds with the beat and often took chances with her notes. Like many in the contemporary rap world, though, she also had considerable talents at taking on different personas; "Otherside of the Game" is a poetic lament from a soon-to-be single mother who just can't forget the father of her child.

Erykah Badu's revolution in sound -- heavier hip-hop beats over organic, conscientious soul music -- was responsible for her breakout, but many of the songs on Baduizm don't hold up to increased examination. For every intriguing track like "Next Lifetime," there's at least one rote R&B jam like "4 Leaf Clover." Jazz fans certainly weren't confusing her with Cassandra Wilson -- Badu had a bewitching voice, and she treasured her notes like the best jazz vocalists, but she often made the same choices, the hallmark of a singer rooted in soul, not jazz.

Though many fans would dislike (and probably misinterpret) the comparison, she's closer to Diana Ross playing Billie Holiday -- as she did in the 1972 film Lady Sings the Blues -- than Holiday herself.
4.5 / 5 All Music Guide.