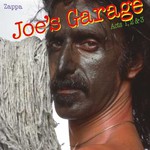 Conceptually and musically as challenging as anything Zappa released in the 1970s, three-act rock opera Joe's Garage was released as two separate packages in 1979 (the new release arrives as a three-LP set). Zappa described the dystopian tale as "a stupid little story about how the government is going to do away with music." The rock opera proved prophetic years later when the government began to examine ways to limit the spread of explicit content in music. The song cycle, conceived over a weekend, tells the story of a young rock 'n' roller who's thrown into prison and released into a world turned upside down by evil corporate, political and religious forces who've outlawed music. Zappa used the practice of "xenochrony" to record parts of the album, taking previously cut live guitar solos and overdubbing them onto new studio tracks. This 2016 vinyl edition is mastered in all analog by Bernie Grundman using the 1979 1/4" safety master tapes from The Vault.