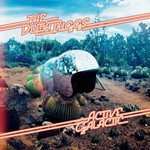 Gold Coast-born, Melbourne-grown lads The Delta Riggs have never worried about being defined by a genre, from the alt-punk riffs in debut HEX.LOVER.KILLER, the hip hop struts of DipzZebazious and now, the cosmic-disco-rock'n'roll in Active Galactic. That's not to say they have ever changed their core identity for a second - the boys are still distinctly, unforgivingly The Delta Riggs.

The stanky left-right combo of Surgery Of Love and Never Seen This Before open the record, and it's a statement of what's to come over the next 13 songs; Michael Tramonte's slinky basslines will leave you feeling dirtier than a Christina Aguilera film clip, but it's frontman Elliot Hammond's laid-back, flirty, disco-funk swagger that elevates this record into a different galaxy. Get It Right kicks off like Zeppelin before it's dip-dyed into funk and then ripped apart by Hammond's signature squall. The Jagger-esque cheek is at an all-timehigh in the mischievous BaddestMotherf-cker In The Beehive - The Riggs at their peak. But for all the bravado, Hammond leaves himself exposed in the heartfelt album closer Losing All Our Love, showing a softer side.

With the sound of an airborne Elliott Hammond, girl's hips moving, guitars chiming, moogsmooging, saxesgronking, Monte Monte'ing and kick drums kicking asses, The Delta Riggs have returned from outer space with a brand new album 'Active Galactic'. If the clash played studio 54 in NYC in 1979, If N*E*R*D covered the Stones 'Some Girls' album from front to back, it's desert disco, it's tough disco, it's the Rock in the Roll, it's the Mothership descending, it's The Delta Riggs 2016.