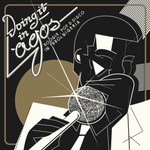 A new compilation featuring 20 rare tracks from the currently much talked about world of Nigerian pop music; a zeitgeist of their early 1980s club culture.

The country's economy was booming at the time and so was its recording industry. Strongly influenced by '70s disco and funk, this new generation were, as the liner notes explain "Eager to sound as American as possible with no hint of the fervour for afro-beat, afro-rock and afrocentric thinking that the 1970s had thrown up".

The original albums that many of these singles came from go for exorbitant prices online, so here's a chance to snap up some of the periods finest music, remastered across three 12"s.