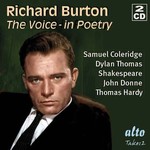 "One of the most expressive and romantic acting voices, in selections of his own"

Welsh actor Richard Burton, CBE, was noted for his mellifluous baritone voice. Establishing himself as a formidable Shakespearean actor in the 1950s, with a memorable performance of Hamlet in 1964, Burton was called "the natural successor to Olivier" by critic and dramaturg Kenneth Tynan. Burton was nominated for an Academy Award seven times, but never won. He was a recipient of BAFTAs, Golden Globes, and Tony Awards for Best Actor. In the mid-1960s, Burton ascended into the ranks of the top box office stars, and by the late 1960s was one of the highest-paid actors in the world, receiving fees of $1 million or more plus a share of the gross receipts.

CD Two:
[1] The Rime of the Ancient Mariner (Taylor Coleridge)
Richard Burton with John Neville as narrator
and Robert Hardy as the Wedding Guest 28:22