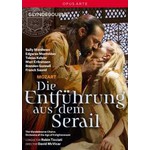 Director David McVicar's original-period vision for this Mozartian gem allows its genius to speak for itself, offering a 'mesmerising, sensitive … outstanding' portrayal of Enlightenment-era fascination with the East that is both 'exquisitely acted and sung', featuring a Konstanze and a Belmonte sung with 'finesse and bravura' and a 'sensationally voiced' Osmin (The Guardian *****). Comic relief in Glyndebourne's 'brilliant production' is provided by 'beautifully sung live-wire performances' of Pedrillo and Blonde, and Robin Ticciati leads the Orchestra of the Age of Enlightenment through a restored, authentic rendition of the critical score with 'lovely fizz' and 'poignant gravitas' (The Independent). Filmed in High Definition and recorded in true Surround Sound.

"This [is] the most convincing dramaturgical presentation of the opera in recent times…Kehrer is magnificent as Osmin, Gunnell is lyrical and alert as Pedrillo, and Eriksmoen steers a delicate path between the amusing and the musically ravishing…the real star is the conductor, Robin Ticciati, whose mercurial energy gives us the most exciting orchestral reading since Solti's 1987 version" (BBC Music)

"The visual aspect is gorgeous, Vicki Mortimer's set, with its many scene changes, evoking a romantic view of the Orient…in the pit, Robin Ticciati conducts the heroes of the OAE in a fleet account of the score…[Montvidas's] Belmonte is ardent, impatient and, at the end, utterly chastened…Sally Matthews sings superbly…the servant couple are very well characterised…[Tobias Kehrer] sings so wonderfully…a delight." (Gramophone)