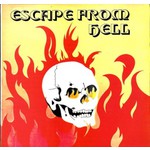 The In Dub album was cut using the great talents of engineer Philip Smart, but when the tracks were pulled together for its follow up Escape To Hell, Philip Smart had left Jamaica for New York and his replacement at the controls was Prince Jammy, who had just returned from Canada at the request of King Tubby himself.

Tapper was definitely in good hands and at the time he could tell that Prince Jammy was soon to become King Jammy due to his outstanding studio work.

Includes dubs to Prince Alla's Funeral and Slave Driver, Junior Ross' Bow Down Babylon, Horace Andy's Natty Dread A Weh She Want and Zukie's own My God Is Real and Revolution.