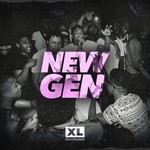 New Gen: a collaborative album showcasing the best of new UK grime, hip-hop, trap & new wave R&B in the U.K. The compilation features buzzed about artists including AJ Tracey, Ray BLK, and Steflon Don - all were included on the influential BBC's Sound of 2017 long list.

New Gen started out as a playlist series curated by Caroline Simionescu-Marin, editor at GRM Daily and now an A&R at XL. Working with the label, she expanded the idea into an album project centred around the New Gen Studio, a space for MCs, songwriters, mixers and engineers to collaborate.

XL elaborates on the album's concept: "It serves as a timely snapshot of London's burgeoning underground music scene, as well as an introduction to those who may have missed these exciting young artists until now."